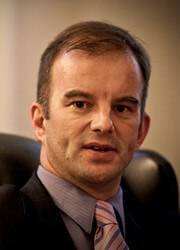 Dr. Trueman is a Professor of Biblical and Religious Studies at Grove City College, Pennsylvania.

Dr. Trueman is Church History and Theological Adviser to the Gospel Growth Fellowship.

He blogs at The Mortification of Spin.

Dr. Trueman on what Evangelicalism needs:

If Evangelicalism is to have a future connected to historic Christianity, then it will have to do a number of things. It will need to break the nexus of non-ecclesiastical and unaccountable platform, power, and money which currently appears to determine the boundaries of orthodoxy; it will need to recognize that errors on the doctrine of God have historically proved just as lethal to orthodoxy as those on scripture – if not more so; it will need to set its biblical theology in positive relation to systematic theology and the creedal and confessional heritage of the church; and it will need to think long and hard about how orthodoxy is transmitted from generation to generation.

So how does Marcion influence modern evangelicalism?

…First, the emphasis upon God's love to the utter exclusion of everything else has become something of a commonplace. We see this in the collapse of the notion of penal substitution as an evangelical doctrine. Now, maybe I'm missing something, but of all the things taught in the Bible, the terrifying wrath of God would seem to be among the most self-evident of all.

…Then, there is the constant tendency to neglect the Old Testament, in particular in our theological reflections, and our devotional lives also need to take full account of the Old Testament. We need to read the Bible as a whole, to understand each passage, each verse, within the theological and narrative structure of the canon as a whole.

Think truncated thoughts about God and you'll get a truncated God; read an expurgated Bible and you get an expurgated theology; sing mindless, superficial rubbish instead of deep, truly emotional praise and you will eventually become what you sing.

Indeed, there are mornings when I wake up and think it's already all over, and that the church in the West survives more by sheer force of personality, by hype and by marketing ploys rather than by any higher power. We need to grasp once again who God is in his fullness; we need to grasp who we are in relation to him; and we need teaching and worship which gives full-orbed expression to these things - and this will only come when we in the West grow up, ditch the designer gods we build from our pick-n-mix Bible where consumer, not Creator, is king, and give the whole Bible its proper place in our lives, thinking and worship.